Make it hot or cold

African Sunrise™ Rooibos Tea has more Anti-oxidant Properties than Green tea without the caffeine and oxalic acid. It is delicious both hot or cold!

The tea and the plant are both pronounced "ROY BOSS"

Known in South Africa as "Red Bush" because of the color of its leaves, and believed by indigenous peoples to have great healing powers, it began to be cultivated in 1930. Today it is a popular and highly regarded drink throughout South Africa, many calling it the "miracle tea." 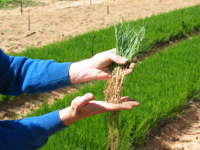 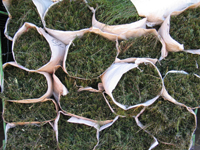 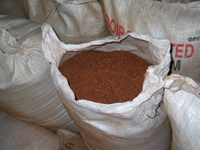 Gives a soothing effect on skin (when directly applied) Use cold tea bags that have been steeped.

Rooibos tea contains superoxide dismutase, which has anti-aging properties and helps to slow down the development of wrinkles. Superoxide dismutase is an enzyme that works to produce healthy skin cells that keep you looking young longer. This enzyme works alongside other antioxidants in rooibos tea to fight free radicals that can accelerate the aging process.

Traditional rooibos is created by fermenting the leaves, which turns them a red-brown color.

Rooibos tea has a sweet, nutty flavor that is often compared to hibiscus tea and earthy tones that are similar to yerba mate teas.

African Sunrise™ Rooibos Tea is an extremely healthy drink and it is a product tailor-made for today's life-style.

A hot, soothing cup of Rooibos tea is completely pure and natural, containing no additives, preservatives or artificial colors of any kind.

It is low in tannin, a substance which adversely affects the body's metabolism by decreasing the absorption of iron and protein.

The clean, aromatic flavor of African Sunrise™ Rooibos tea can safely be enjoyed in unlimited quantities throughout the day, with no harmful side-effects.

Rooibos tea contains polyphenols that help to fight free radicals, keeping your body healthy and ready to tackle the day.

Our Rooibos tea is naturally caffeine free and with powerful antioxidant and anti-inflammatory properties, drinking a cup of rooibos tea every day can support your healthy lifestyle. Safe for the whole family to enjoy, even your pets!

African Sunrise™ Rooibos is made like ordinary tea. Use one tea bag of dried leaves per 6 oz. cup. Pour boiling water over the leaves and steep 6-10 minutes.

Because there is a very low tannin content, African Sunrise™ Rooibos tea can steep almost indefinitely without getting bitter.

It is routinely steeped 20 minutes or more, and drunk hot or cold or iced with citrus garnish. In South Africa it is commonly served hot with milk.

It can be reheated with no loss of flavor.African Sunrise™ Rooibos tea has a naturally sweet taste, but you may sweeten with stevia extract or raw honey.

Write Your Own Review