Special Price $30.99 Regular Price $32.99
In stock
SKU
IRON
Be the first to review this product

Iron is a trace mineral that is essential for health, with its most important function being the production of red blood cells. The iron-rich pigment in blood is what binds life-supporting oxygen and transports it to tissues. Without iron, the immune system is impaired since bacteria-killing white blood cells are dependant on iron.

Iron is also required for the proper function of the nervous system and the production of neurotransmitters; and it is an iron-dependent enzyme that helps the liver destroy toxic chemicals and waste products. It has been estimated that as many as 1 billion people are deficient in this important mineral. As many as 60% of the U.S. population may not get enough iron. Iron deficiency is most common among teenagers, elderly, pregnant or lactating women, those who consume a junk food diet, and anyone with a liver disorder.

Early symptoms of iron deficiency include fatigue, decreased alertness, diminished endurance, dizziness and rapid heartbeat. Frequent colds, chronic infections, and poor digestion are also signs of iron deficiency. Chronic deficiency leads to anemia. While iron deficiency has been called the most prevalent nutritional problem worldwide, many people shy away from iron supplementation due to horror stories promulgated by the media. However, these stories fail to reveal the whole truth. Supplemental iron is necessary, and is perfectly safe when taken in a form that is absorbed by the body.

Optimal Iron contains Ferrochel _ the only patented form of iron in a blend proven to be assimilated by the body up to 400% more than other iron supplements. This means that, rather than building up as a toxin in the body, Optimal Iron is effectively used by the body to enhance health. 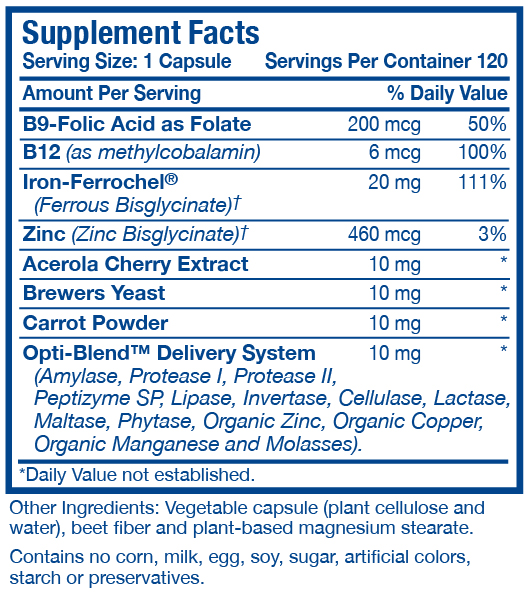