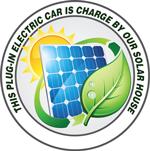 Combining a Photovoltaic Solar installation with Two Plug-in Electric Vehicles, NWC Naturals® is striving to be a green company!

The owners of NWC Naturals® have installed a 48 Panel Solar system to the roof of their home. This system powers the whole house and also charges both plug-in cars.

They have installed  LED lights throughout the house instead of using conventional incandescent light bulbs. Instead of burning 60 watts, the LEDs only use 6 watts- 1000% less electric consumption!

In addition, they have installed an on demand tankless water heater to further cut down on wasted energy.