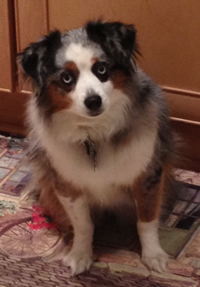 Get to know Paddy: The Official Total-Zymes® Dog. She can be seen on many of our Pet Supplement labels, including our Total-Zymes®, Total-Biotics®, and Total-Zymes® Plus™ jars. She also leaves a little note at the bottom of each Petenzymes.blog, although in her signature photo, she was just 4 months old!

When we got her she was: 3 months old

Favorite Thing To Do: Traveling in the car and going to the beach

Personality: Paddy is shy, but very smart. She also enjoys “working.” Each morning she “herds” her toys by bringing them one by one into the back yard.

Australian Shepherds, or “Aussies”, are bred for herding. They get their name, not because they are from Australia, but because they were used for herding Australian sheep. They have also been known to herd cattle, goats, chickens and ducks. These dogs are known as working dogs, and have a special ability to be trained. Although they make great family pets, they are at their best when they are working and active. Because Australian Shepherds have such strong instincts, they may at times “bump” their owners in an effort to herd them!